In this post, we look at how a statistical model can provide specific insights about accessibility. By combining intuition and quantitative results, we see that some suburbs, like Karori, have poor and inconsistent accessibility to playgrounds, while suburbs like Newtown and Te Aro have consistently good accessibility.

The model is further able to show that while Karori seems bad, a significant reason is that the suburb is too large and heterogeneous compared to inner city suburbs like Te Aro and Newtown. The solution to this issue is using sensible spatial filters. We’ll see that the LINZ spatial filter can be used for an updated, and more appropriate, model of accessibility.

Before diving into the nitty gritty of modelling accessibility across the different suburbs, it’s worth taking a high-level persepective into why modelling is useful. I hope to make the case that approximating reality with models allows us to dredge up some useful insights.

The goal of statistical modelling

The best reason for trying our hand at statistical modelling comes from the entertaining and brilliant pedagogue: Ben Lambert.

In life, noise obfuscates signal. What we see often appears as an incoherent mess that lacks any appearance of logic.

Statistical inference is the logical framework we can use to trial our beliefs about the noisy world against data. We formalise our beliefs in models of probability.

In his book, Lambert goes on to elaborate the gains acheived from employing a Bayesian approach to statistical inference. Our analysis into accessibility by suburb doesn’t explicitly benefit from a Bayesian approach but I’ve chosen to use it anayway since I’m now completely avowed to The Bayesian Way (Bayes-do?).

Models as an approximation of reality

The core component of statistical inference is a statistical model - often shortened to just model. Common models formalise the data generation process by quantifying the relationhip between inputs and outcomes. For example, linear regression models quanitfy the relationship between a set of user-defined inputs and the possible outcomes given those inputs.

The model we’re using in this post is much simpler: we’re considering the probability space of the outcomes - with a particular interest in summary statistics like the mean, $\mu$, and standard deviation, $\sigma$. As we’ll see later on, we choose a particular mathematical form to represent the probability space of average ($\mu$) and heterogeneity ($\sigma$) of accessibility within a suburb.

It’s worth noting that not all data-driven questions benefit from statistical modelling. Models can be complicated and difficult to explain to others - even technically-oriented peers. In view of this, some data evangelists advocate a simpler analysis process. Kat Greenbrook highlights how the modelling aspect can be left out for many business analytics questions.

Data anlysis alone is powerful; exploratory analyses unearth useful insights that can be followed through with business actions. As people who harness data for a purpose, we must constantly evaluate whether the extra complexity of the model layer is adding significant utility and insight.

Modelling should never be undertaken if there is not a clear use case for the output.

As someone who has frequently lunged into modelling without a cause, I can attest to the pervasive culture of the ‘Modelling Silo’ in Data Science. This ‘cycle’ is wholly disconnected to pertinent questions and, any useful actionable output.

Model for a reason

Now that we have been cautioned to think before we model, we can identify how models can help better understand playground accessibility in Wellington.

In the previous post, we ended with heatmaps of accessibility - defined as total travel time. The heatmaps conveyed a holistic picture of areas with worse accessibility due to the hilly topography. However, we couldn’t pick out any details from the overview. For example, we might care about how our specific neighbourhood compares to another, or our neighbourhood vs. the average for the city.

Comparisons can be done with single point values alone. But, robust comparisons rely on statistical inference - the most classic being the t-test for comparing two means. In a following section, we will see how we can robustly compare suburbs using a Bayesian statistical model.

Adding a model for comparing suburbs has further utility - it can be used for explicit or qualitative decision making. Explicit decisions are appropriate in a business context since executives want to tl;dr the best option. Since this series is more focused on exploration, we’ll be building a qualitative picture guided by metrics and analyses.

Can we summarise the playground accessibility characteristic for a given suburb?

This question can help understand how “family-friendly” a particular suburb is. Young families could compare the suburb accessibility characteristics to help make the decision for a move or, evaluate whether the suburb is right for their lifestyle.

From this question and potential use, we can desgin the model and outputs for an intuitive comparative analysis. The final model allows for two levels of qualitiative comparison: (1) comparing a single suburb to the city average or, (2) comparing any two suburbs together.

Since models approximate reality, the difference between the model and reality can also add valuable insight.

Which suburbs don’t follow the approximation set by the model? Can we use our domain knowledge to understand why?

In this scenario, mismatch between the data (‘reality’) and the model can help us understand the nature of suburbs better; and use this understanding to update our model for a better representation of reality.

In all the previous posts (and series), we’ve only looked at accessibility for all of Wellington. Here, we show that the accessibility data can be filtered by the spatial boundary of choice. This is done by some clever geoprocessing enabled by geopandas.

The steps are pretty simple: 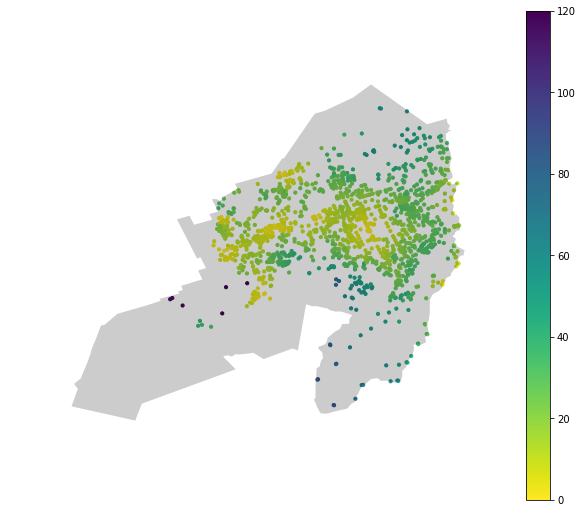 Modelling of accessibility in a single suburb

Once we have the accessibility values by suburb, we can start thinking of how we might model them. From the previous figure, the suburban accessibility distributions have some distinctive features:

Given the unimodel nature of the majority of the accessibility distributions, a normal model is a trivial starting point. We won’t go into the details here but we can easily write a Stan model to compute the $\mu$ and $\sigma$ values of a univariate normal distribution. Results from a Stan fit are given below. I’ve also computed the posterior predictive - the ‘y_pred’ variable.

The posterior predictive is a useful diagnostic as it reverse-engineers data from the specified model. Checking this generated data against our original data is a very useful tool to assess the suitablity of a model. 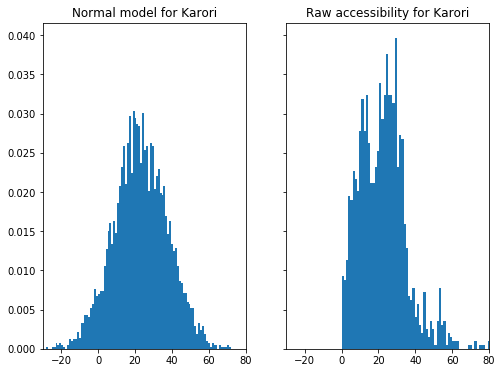 A truncated Normal distribution can easily address this issue. Implementing the truncated Normal model variation in Stan is easy - we just need to specify the appropriate bounds for the Normal distribution: lower, upper or both. The only aspect that needed some research was generating posterior predictive samples. But helpfully others have encountered this before and there was a useful discourse in the Stan forums.

The figure below shows the posterior predictive samples generated from a Normal and truncated Normal distribution respectively. The truncated Normal can be judged a good fit as it matches the distinctive features of the accessibility data.

Modelling every suburb on its own is doable but more useful is a succinct model that does this while also modeling summary statistics across all suburbs. This type of model is commonly known as a hierarchcal model. Hierarchy comes from the intuitive ordering of the models. Here, we have an overall city level model and many suburban level models.

We get two types of posterior distributions from the hierarchical model:

It is worth noting that only the top 80% of suburbs (by node count) have been included in the model. This was mainly to get the model to run reasonably quickly.

The posterior distributions output from the hierarchical model can be visualised in a convenient plot known as a Forest Plot. The mean values of the suburban level posterior distribution are plotted as circles. The relative value is used to order and colour code the circles. The 95% credible interval of each suburban $\mu$ or $\sigma$ is also plotted as horizontal bars - but these are usually smaller than the circle. The grey band represents the 95% credible interval for the city level average.

A couple of general points stand out clearly:

To pick out suburban character (in terms of playground accessibility), we need a visualisation that (1) focuses on the suburbs that fall outside the ‘average band’ and, (2) can consider $\mu$ and $\sigma$ at the same time. A simple 2D plot that can satisfy these criteria is the quadrant matrix.

We can modify the standard layout slightly to get both the quadrants and the average bands by: (1) normalising the suburban means (for both $\mu$ and $\sigma$) with the city means and, (2) plotting the city level credible intervals as a cental cross. The resulting quadrants now represent combinations of suburban $\mu$ and $\sigma$ relative to the city. 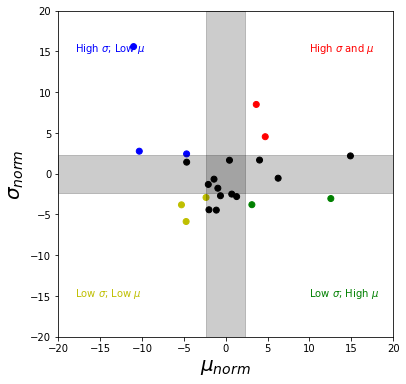 The quadrants represent accessibility character which have a simplistic interpretation.

We can get the suburbs that lie in the 4 quadrants listed above with some simple data filters. The list goes from the best suburbs to the worst in terms of consistent accessibility to playgrounds.

Suburbs that don’t fit the model

Part of the reason that Karori performs so poorly is because our model is a poor fit to the accessibility data. In the figure below, we see that the raw values of accessibility appear to have 3 modes - a feature that is reduced to a single average mode in our model. This reduction causes both the $\mu$ and $\sigma$ values to inflate. 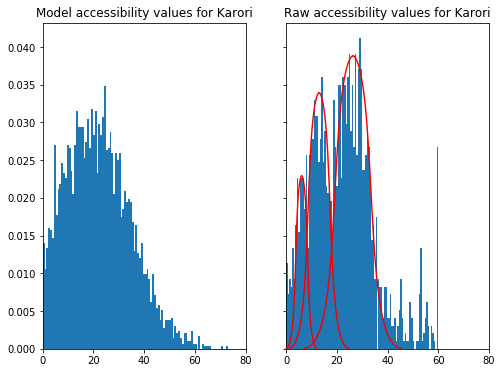 Once again, heterogeneity in suburban characteristic is the reason for the model being a poor fit for Rongotai. Rongotai is a suburb with both residential and industrial areas: the residential areas bordering Kilbirnie and, industrial areas containing Wellington Airport and the large shopping area near Lyall Bay. The dual nature of the suburb is reflected in two distinct modes in the raw accessibility values. 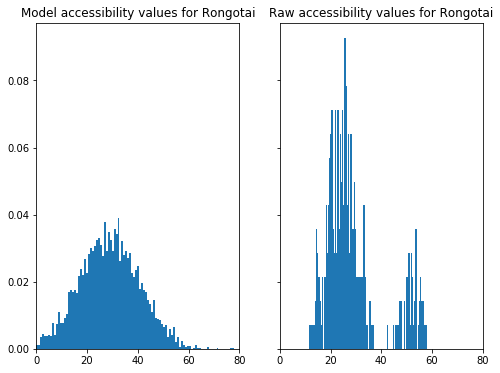 One way to better model Karori is to reduce the suburb into smaller units: perhaps Area Units (now called Statistical Area 2, SA2). SA2 / area unit boundaries are available from Stats NZ. Unfortunately, these units aren’t engineerd to fit perfectly within suburb since they’re primarily designed as statistical units for the census. We see below that SA2 units for Karori don’t extend as far as the suburban boundaries. However, this can be managed by a convenient overlay of SA2 units within the suburban boundaries. And this new overlay geometry could be used to subset the accessibility data.

An even better spatial filter is using the LINZ residential polygons to only model accessibilities that fall within the residential areas of the suburb. This should mitigate some of the high $\sigma$ issues we’ve seen. In the table below, we see that blue regions are the residential polygons overlaid on the accessibility data for Karori and Rongotai. The regions cover the highest density regions of the suburb and make for a much more intuitive filter than area units.

We’ve done the hard yards in extracting some relevant insights about suburban walkability. The insights have a human-understandable frame and can be used to evaluate suburbs from a citizen’s point of view. However, there are some obvious improvements that can be made; the main one being the removal of accessibility for non-residential areas. This is quite an important update so we’ll cover it in detail in the next post.

You may also enjoy

Summary The first part of a proposed three part series on tools for geospatial analysis in the transport domain. This review details functionality of three k...

Impact Of Hills On Walking To Playgrounds In Wellington

Summary Unlike cars, pedestrians are sensitive to their environment - from the weather to the terrain. Changes to either can impact the walking experience or...

Walking To Playgrounds In Wellington

This post introduces a series of walkability analyses for Wellington - with a specific focus on walking to playgrounds. The analyses will allow us to examine...